No Free Ride for Airbnb

Companies like Airbnb are exacerbating California’s affordable housing crisis, but lawmakers in Sacramento want to give the company a free ride.

A new study from the Los Angeles Alliance for a New Economy suggests that in the metro Los Angeles area alone, more than 7,000 units have been removed from the rental market to be used as short term rentals for tourists and business travelers. The result? Fewer people have permanent housing and rents are rising even more.

Airbnb and similar web companies are fueling the explosion in short term rentals. The site encourages property owners to connect with customers that want to rent lodging for less than 30 days instead of long term renters. 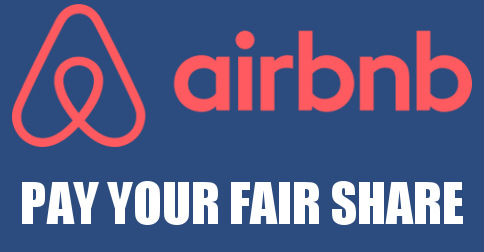 In many California cities, there are laws against converting scarce housing resources to tourist use. Using political influence, Airbnb has engaged in a systematic campaign to dismantle those laws and avoid paying any taxes to offset their impact. Now, they are taking their lobbying efforts to the state level, and a new bill has been proposed that would make Airbnb rentals exempt from local taxes.

It’s bad enough cities are losing valuable rental housing stock. The least AirBnB and other short term rental corporations can do is pay their fair share.

How else are we going to provide crucial services and affordable housing opportunities in an increasingly unaffordable market? But Assemblymember Matt Harper -- an Orange County Republican -- has introduced AB1220, a bill that prohibits cities from collecting taxes on short term residential rentals. And with industry giants like Airbnb spending lavishly in Sacramento to have their way, this kind of special interest exemption could become law unless you act now.

We can kill this bill if we let Democrats in Sacramento know we are watching. Democrats control the legislature, but history shows they will quietly pander to special interests like Airbnb unless we expose this.

This bill could be heard any day by the Assembly Committee on Local Government.  If it passes there it will head to the Assembly Committee on Revenue & Taxation. We’ll deliver your messages directly to those Committees. If enough of us speak out we can make sure this bill never makes it out of Committee. But we have to act now or you can be guaranteed that Assemblymembers will push it forward.